My wife and I are new to the scene.  We’ve played for a while at home, but are just starting to explore events and parties. We found the Domina Parties website and were impressed, but weren’t sure if it would be the right event for a couple. From the time we wrote to Miss Penelope to enquire, she could not have been more accommodating and helpful. We arrived on the night quite nervous but were made to feel welcome. The ladies really looked after my wife, but treated me terribly (which is pretty much the point).

While the 3 hours seemed to fly by (doesn’t it always when you are having fun), there was plenty of time to get a lot of different play in. After being lined up with the other slaves as we were instructed step by step to became naked, my night included:

We were also lucky enough to have Leah from LHD art at the party. Leah is an amazing artist. The pieces she created during the party are incredible. She is clearly very talented and the pictures added depth to the memories from the night. If only there was somewhere I could hang something like that, I would have tried to buy one or two.

Miss Penelope expertly maintained the balance between the serious side of the play and the fun, adventurous party atmosphere. I spent 3 hours alternating between giggling at the fun and being terrified of what was coming. I can’t recommend the party highly enough, we will definitely find our way to another one in future.

It was such a joy to have this wonderful couple join us for Obey! We had an absolutely delicious time playing with them and we would love to encourage others to get in touch with us for future events. 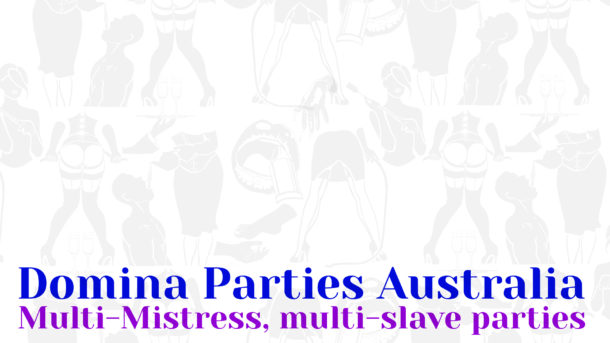 Subscribe to receive the latest party dates and locations each month.
Include your city to ensure you're on the list for special events and offers in your area.