Upon reading what Domina Parties had planned for the upcoming Slave manor, I was both intrigued and excited. I wondered in what ways the event would differ, from previous parties that I had attended. From the description of the event, it sounded to be very different in style. I imagined that it would be more formal than the other parties I had attended in the past.
Upon arriving, I was greeted at the door by Lhdart, the amazingly talented resident artist for Domina Parties. Lhdart directed me to take a seat in the waiting area while the other attendees arrived. Once everyone had arrived, the Domina’s came out to introduce themselves. Miss Penelope Dreadful, who looked truly, breathtakingly resplendent in a fine black mesh gown, introduced Misstress Tallula, Mistress Blake and Eternal Angel who were all just as finely dressed. This was the first indication of just how special this event was to be. Miss Penelope proceeded to explain that Slave Manor was the realisation of something she had been wanting to run for some time. Where other domina parties had a focus on the bondage and kink aspects of BDSM, Slave manor was to be different. Slave manor was to be an exploration into the power exchange of the mistress/slave dynamic. Something that speaks to me quite powerfully as a personal submissive wishing to more truly and deeply explore this type dynamic. Miss Penelope explained that for this event, all slaves were to be stripped of their identity and were to be given white gloves & bow ties with a number tag sewed on. The randomly assigned number would be how I was to be addressed for the rest of evening.
As they say, time flies when you are having fun and before I knew it the party was wrapping up with the slaves gathering the leftovers and packing up the table. As a final, parting act the Domina’s had all the slaves crawl to the entrance behind Miss Penelope as her mesh gown trailed on the ground behind her. Having changed back into civilian clothes, and thanking each of the Dominas in attendance, I was released into the real world to ponder the highs experienced over the prior few hours. I spent the next day trying to hold onto the moments of magic experienced at the event.
I’m looking forward to the next Slave Manor with much anticipation as it is bound to be something very special. I couldn’t recommend attending more highly. This is an event I really loved.
– KP 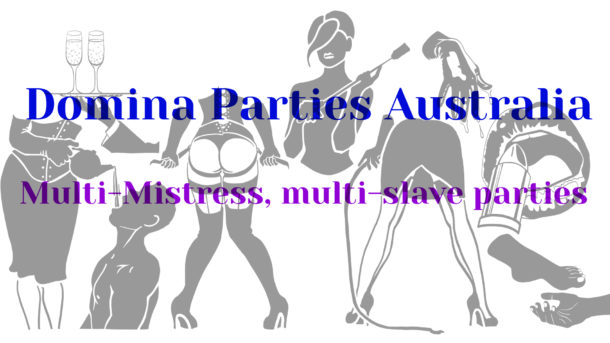